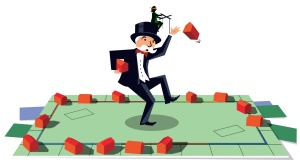 The first and last Nobel prizes to be announced each year–Medicine/Physiology and Economics–are the ones most immediately relevant for biocultural anthropological research. (And to the extent that human behavioral decisions and aggregate behavior patterns are shaped and constrained by human biological life-history patterns, I would argue that the kind of pioneering behavioral and life-history work carried out by anthropologists Kristen Hawkes, Kim Hill, Hillard Kaplan and others would merit consideration in either prize category. In any case …) I have already posted about the medicine/physiology award-winning research, which is on a complex but important topic: dynamic proprioceptive embodied feedback with neural mapping of the immediate spatial environment.

Early last week, the Swedish Riksbank’s Economics Prize in Memory of Alfred Nobel was awarded to the French economist Jean Tirole. And Tirole’s work addresses contemporary, large-scale institutional manifestations of a very general problem in human social life: how multiple or enduring conflicts of interests are often aggravated by one powerful party, whose decisions (usually unintentionally) create perverse incentives for other parties, both powerful and weak. As we will see, the issue of perverse incentives–when considered from a biocultural evolutionary perspective–is even deeper than you might expect.

In a particularly important area of his research, Tirole has focused on how powerful governments influence the behavior of large, also powerful–but not necessarily natural monopoly–firms. The interesting issue is this: asymmetric information. Powerful firms themselves have a strong incentive and multiple strategies for keeping secret the true costs of production for their goods and services. If governments used their sovereign police powers to force firms to reveal those costs, it would strongly suppress the firms’ incentive to innovate and provide greater choice or higher value to consumers. Tirole and his colleagues pointed out that, consequently, governments interested in the happiness and economic well-being of its citizens would actually not want to know too much about the firms they regulate. Yet, without any knowledge, governments would not be able to prevent powerful, near-monopoly firms from taking tax subsidies, while they pass on arbitrarily high prices to consumers. This is clearly a dilemma for governments and the citizens/consumers they govern. If governments know too much, its citizens get suboptimal goods and services at too high a price. If governments know too little, its citizens get goods and services–very possibly suboptimal–at too high a price. Tirole’s solution for this seeming dilemma is for governments to offer such powerful firms two choices of contracts:

Given the choice, a large and influential firm would choose in its own self-interest, even at the risk of revealing something about its production costs relative to demand. Big firms with long-term, rigidly high R & D, production, and distribution costs relative to consumer demand would choose a subsidy contract, in order to achieve a higher profit in the face of broader systemically imposed tight margins. Firms that have–or predictably could achieve–lower costs relative to demand … well, they would choose the high-powered price-cap contract, because they would be able to achieve higher profit margins by lowering costs. Meanwhile, the government gains only general information: is the firm in a position to achieve innovative efficiencies, or is it facing prolonged high costs that will limit investment in R & D? The government does not get its nose in the details of the firm’s true costs, but it incentivizes the firm not to abuse its market-share power, encouraging it to provide the best possible goods and services.

This regime works only for those sectors with sustainably high consumer demand and a limited number of very large “oligopolistic” influential firms … that is, firms which can use their outsized market share to shut out competition. Indeed, large firms with a limited number of established competitors can behave in an “anti-trustish” way without constituting natural monopolies or technically breaking antitrust laws.

Such sectors support large firms because production costs become reasonable at larger organizational scales … AND the products themselves enjoy enduring consumer demand. The goods and services (mainly goods) produced in these sectors tend to be staples for current well-being … or they are drivers of future sustainable or improving life-quality … in our globalized and globalizing biocultural system, that is.

It is in a democratically elected government’s interest to foster competition and innovation in such sectors, in order to support prevailing consumer demand preferences in such systemically critical areas. The brilliance of Tirole’s work is that he has developed evidence to support integrating financial regulation into corporate tax policy. If politicians on both ends of the political spectrum (from ultra-free-market on the right to left-leaning Democrat or mainstream social democrat) could take a step back, they would hopefully understand that a “Tirolean” approach to business taxation would help simultaneously to encourage product innovation and investment in efficiencies, while discouraging abuse of power by large, especially powerful firms against their competitors … and against the interests of private citizens and all corporations for the fair and honest contribution of taxes due by all.

Of course, the purpose of focused models is not to claim a one-size-fits-all solution for government-private firm relationships. Tirole’s model helps us focus our attention. It casts clearer light on a complex political-economic problem. In doing so, the model further allows us to see that problem’s connection to interrelated, potentially more ethically profound issues.

With the work on “oligopolistic” sector regulation, Tirole and his colleagues have increased awareness and understanding that in enormous economies–constituted by large firms and huge numbers of consumers–it is desirable for citizens, their representatives, and elected executives in government to be very smart about financially regulating key sectors. Yet, in raising awareness about just how important oligopolistic sectors are to globalized and globalizing economies–and the societies that they constitute, shape, and constrain–Tirole reveals an even deeper conflict of interest for governments, citizens, and large firms alike.

What happens when firms that reveal potential to reduce production costs relative to demand–that is, they’ve chosen a price-cap or low-subsidy contract over a high-subsidy one, in order to maintain market share over potential oligopolistic competitors … And it becomes public later that they’ve achieved those lower costs through ethically questionable means? Like mines or energy companies dumping toxic waste into watershed systems. Or putting workers in life-threatening situations, under threat of being fired otherwise.

Now, the perverse incentive is for the consumer, governments, and large firms alike to turn a blind eye to inhumane and unethical treatment of certain individuals or groups. This issue raises the difficulty that democratic and open governments have, on a more basic level, in using judicial and police powers to maintain a level playing field for firms in such economically high-impact, oligopolistic sectors. It’s one thing for large firms to retain the incentive to achieve proprietary knowledge over how to lower production costs. It’s another thing for competing firms, employees, and consumers to be able to trust that cost-reductions aren’t achieved at the expense of human lives and local community well-being.

If governments–and the citizens who legitimize them–allow powerful firms and their executives to pay negligible penalties for such callous and greedy strategies, then we maintain our cultural commitment to (usually tacitly) institutionalized violence by the powerful against the weak as cosmological condition for order in the world we experience.